‘American Fix’ and The Path Out of The Opioid Epidemic

Five years ago, Ryan Hampton stood face-to-face with President Obama at a fundraiser in Coral Gables, Florida. He had established a career, network and reputation, guaranteeing a bright future in politics. But despite his skills and professional tenacity, he was facing a struggle of his own. In the same moment he was shaking hands with the former president, he was deep in the grips of opioid addiction.

Hampton has been in recovery for more than three years and has become one of the foremost voices leading the recovery movement, working withFacing Addiction and advocates, entrepreneurs and people in recovery across the country.

Last year, Hampton announced the Voices Project, an initiative to encourage people nationwide to stand up, speak up, and share their story as a person in recovery. But a year later, Hampton says sharing stories is not enough.

“We’ve gotten people to share their stories, because that’s the most important part,” Hampton says. “But now, it’s about what you do after you share your story. This is what’s going to move our movement forward.”

From advocate to author

Today, Hampton released his first book, American Fix: Inside the Opioid Addiction Crisis — And How To End It, just days before International Overdose Awareness Day on August 31. 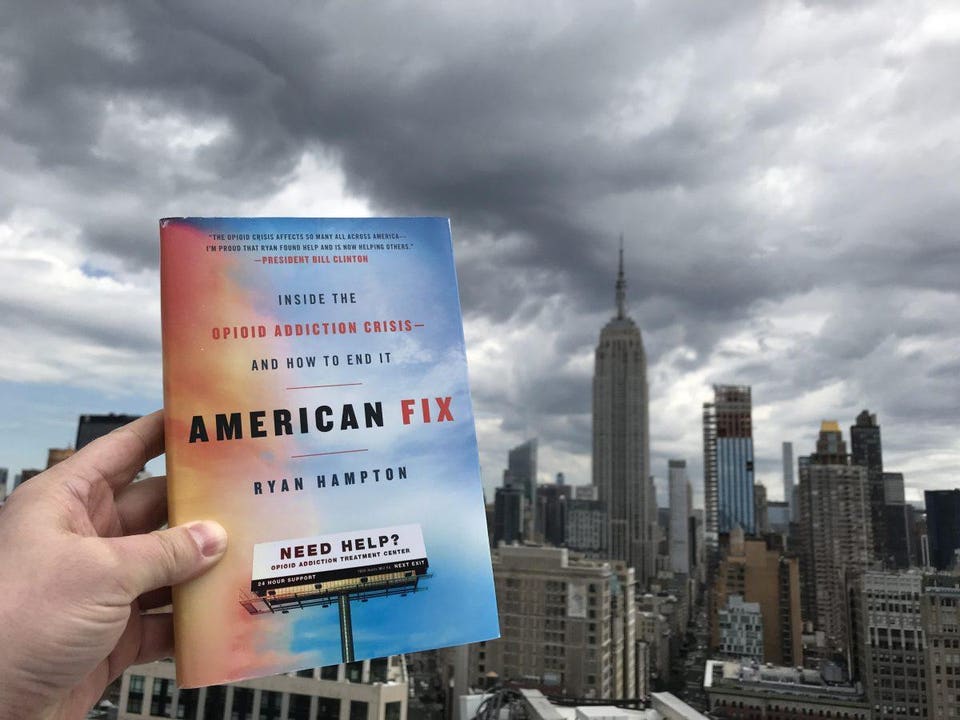 American Fix: Inside the Opioid Addiction Crisis — And How To End It MACMILLAN PUBLISHERS

Hampton describes his journey from advocate to author the way most entrepreneurs describe their inventions — he was simply solving his own problem. After showing up at a bookstore last year trying to find a resource that offered a comprehensive overview of the opioid epidemic and recovery movement, he couldn’t find one.

So he wrote it himself.

Hampton describes American Fix as a manual of sorts, hoping to inspire clear, focused action in the lives of recovery advocates and people in recovery across the country. Action is what the movement needs, according to Hampton and other leaders in the recovery movement.

They know that mobilizing the recovery constituency of more than 45 million people is the only way out of the opioid epidemic at hand — an epidemic that claims as many as 116 lives per day to overdose.

It’s saving lives that continues to be the foremost goal of the recovery movement. According to Hampton, reforming the treatment industry and protesting the practices of Big Pharma are among the list of top concerns for advocates today.

According to Hampton, insurance providers won’t pay for long-term treatment, which is among the reasons why lobbying and political advocacy are so important.

“The Mental Health Parity Act was passed by President Bush in 2008, but today, 10 years later, we still have no enforcement on these laws,” Hampton says. “Insurance providers are getting away with murder, and we need to hold them accountable. But change requires good policy, and good policy requires policymakers that are educated on this issue. ”

With much to do, Hampton and other leaders are counting on the recovery constituency—45 million strong, made up of people in recovery and their families and friends. Hampton describes this as the “largest tent out of any social movement in modern-day history.”

“Recovery is truly transpolitical in nature,” he says. “We’re a large constituency and growing. We’re men, women, people of color and we’re from all political backgrounds because addiction doesn’t discriminate.”

In American Fix, Hampton discloses at his next initiative—registering 1 million recovery voters in all 50 states by 2020. To do this, he’s teaming up with When We All Vote, a non-profit initiative led by Michelle Obama. Drawing upon the momentum of the Voices Project, Hampton is confident in one thing: when the recovery community shows up to vote, it will require policymakers to act on their behalf.

But creating a new constituency of consequence is going to take more than an announcement, Hampton says. A goal this lofty—and important—requires partnerships, corporate philanthropy, and innovative ideas.

From co-organizing a march outside of Purdue Pharma earlier this month to announcing Recovery Fest, the nation’s first sober music festival hosted in partnership with Macklemore and the Above the Noise Foundation, it’s clear Hampton is already getting to work to do just that.

The reason is clear: For Hampton, and the millions affected by the opioid epidemic across the country, the fight is a personal one.

“The day I spoke with President Obama in 2012, I didn’t think I was going to live. It was clear to everybody else in that room that I had a problem and that there was something going on with me. But people didn’t bring it up. I was treated with silence and embarrassment,” Hampton says. “Today, I don’t think it would have played out exactly the same way it did then. I hope that now, people would have asked me how I was doing. This work is about making sure that if I need help again, if I have a recurrence or a slip, that there are resources there for me, too. I’m fighting for my friends, but I’m also fighting for me.”

With that, there should be no argument.

No matter which seat you sit at around the table fighting against the opioid crisis, it’s personal. Behind the recovery movement are families, communities, and struggling human beings searching for hope. And as Hampton reminds us, “Addiction does not discriminate,” even if you’ve shaken hands with the president.

“American Fix is my attempt to bring recovery into the light. This is not just our [the recovery community’s] agenda—this should be our country’s agenda.”